Big news! Carl Barkemeyer, Criminal Defense Attorney has been nominated as a Premier Lawyer of America. Premier Lawyers of America recognizes the select few attorneys who have demonstrated the highest standards of excellence in the practice of law. 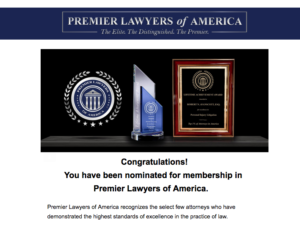 Carl Barkemeyer attributes his premier status as a criminal defense attorney defending clients in criminal court to his natural desire to help people who are in need.  No person should ever be bullied by anyone, especially prosecutors that work for the government. It is scary for an accused to face criminal charges, knowing their life could be ruined by a bad decision. It is scarier to know the people who have their lives in their hands, the prosecutors, do not care if they are real people or not. To prosecutors, defendants are only a number. Carl Barkemeyer gets satisfaction from his job knowing that he can open the eyes of prosecutors to realize his clients are people too.

Carl Barkemeyer is a Baton Rouge criminal defense attorney and DWI lawyer who defends clients charged with criminal charges in all areas of Louisiana.  Whether it is a misdemeanor or felony arrest, he can help.  He is a premier lawyer that defends clients for all types of charges including DUI, drug charges, domestic abuse, and theft in Louisiana.  His goal is always to keep you out of jail and protect your criminal record.  He is dedicated to criminal defense in Baton Rouge, LA and the rest of Louisiana. If you have a criminal arrest or summons in Louisiana, give our premier lawyer, Carl Barkemeyer, a call to discuss how he can help.