The crime of battery in Louisiana is defined as the intentional infliction of force against another person. To commit a battery, it is essential that there must have been some actual contact or force between the parties. Otherwise, it would be classified as an assault.  Punching another person or otherwise hitting him with an object is within the definition of the term Battery. It is classified into four major kinds: aggravated, aggravated second degree, second degree and simple. Their difference depends mainly on the methods used by the offender, the status of the victim or the repeated nature of the offender’s act. In order to understand how they differ, it would be best to first understand their definitions. 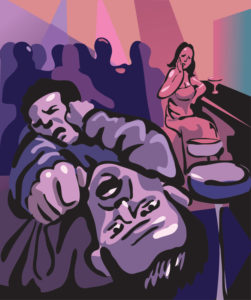 What is Aggravated Battery?

Aggravated battery is the violent unconsented physical contact with another person with the use of a dangerous weapon or any gas, liquid or other substance which is likely to result in death or great bodily harm of a person.

What is Second Degree Battery?

The battery is considered a second degree when the offender has deliberately and willingly inflicted serious bodily injury without the use of a weapon or firearm to another person. Death of the victim is not necessary to be convicted of battery since it is sufficient that the act of the offender resulted to exposure to serious risk of death, physical harm or injury to his victims involving unconsciousness, disfigurement, severe pain, or any other loss or impairment of the body and limbs as well as the victim’s mental faculties. If such acts are committed through the employment of dangerous weapons, the crime will be considered as aggravated which warrants a graver penalty. However, the exception to its application is when the patient has given his consent willingly to a medical provider.

What is Aggravated Second Degree Battery?

Aggravated second degree battery is a battery committed with a dangerous weapon when the offender intentionally inflicts serious bodily injury.

What is Simple Battery?

Simple battery is the act of touching another intentionally or applying offensive force on another person’s body without his/ her consent. The application of force is one that is classified as offensive or may result in physical injury on the person.

The difference in the matter by which they are committed:

With the following definitions stated, the first difference between aggravated, second degree, and the simple battery can be surmised. They are committed using different methods. Aggravated battery is committed with the use of dangerous weapons. On the other hand, no weapon is needed in order to commit a second degree or simple battery.

The difference in the intent of the offender:

Another difference between the four kinds of battery is the intent of the perpetrator. In both aggravated battery and second degree battery, the perpetrator must have intended to cause serious bodily injury. When it comes to simple battery, on the other hand, the infliction of serious injury against the offended party must not be intentional.

The difference in their classification:

A felony is defined as a crime that has been deemed as a very serious and dangerous crime that often puts other citizens in public into danger. Compared to misdemeanors, felonies are considered a higher level of crime.

In contrast, a misdemeanor is defined by Louisiana Criminal code as any crime other than a felony. It includes offenses that are usually punished by a fine and/ or up to a year of incarceration.

Simple battery is not a crime of violence, unlike the crimes of aggravated and second-degree battery which are considered as such in Louisiana. The distinction of such offenses is relevant since if it is a crime of violence if the defendant is sentenced to suffer imprisonment and must complete 85% of his sentence; otherwise, his ability to parole is lengthened. Also, a defendant who committed a crime of violence cannot receive a deferred sentence under Article 893.

The difference in their penalties:

An offender committing a simple battery, it is classified only as a misdemeanor offense, is penalized only by imprisonment of up to six months and a fine reaching $1,000. The offender may be sentenced to jail time, pay a large fine or both.

A person committing aggravated battery, it is classified as a felony offense, is punishable by up to ten years in prison, with or without hard labor or a fine not exceeding $ 5,000, or both.

Second degree battery is classified as a felony offense is penalized by imprisonment up to eight years, with or without hard labor or a fine reaching $ 2,000, or both.

Aggravated second degree battery carries a potential sentence of up to 15 years in prison.

The difference in the availability of probation if convicted:

On the other hand, although probation is available in second degree battery, the law requires that an offender must have served at least 18 months of the sentence imposed upon him before being allowed to avail of such benefit.

In all kinds of battery, the usual defenses are self-defense or defense of others. In Louisiana, force may be used if it is necessary in order to protect you or someone else.

In addition, a defendant in an aggravated battery may contend that the battery never occurred. Proof that the victim got hurt is not required. Only that the victim received a battery with a dangerous weapon.

In addition, a defendant in a second degree battery may interpose the defense that the act complained of was not attended by malice, bad faith, or intent to cause or inflict serious physical harm or injury to the offended party. Careful examination of the specific facts will be conducted in order to determine whether or not it is reasonable that an offender would assume bodily injury from the type of force he used.

The difference in handling warrant:

Receiving an arrest warrant for simple battery in Louisiana would generally mean that the offender is required to turn him/herself in. However, a lawyer may be able to get the officer to write a summons instead. That is not the case for aggravated battery and second degree battery. Since both are classified as a felony, receiving a warrant for either would require a person to turn him/herself in. The offender then shall be booked and a bail shall be set by a judge. A criminal lawyer must be contacted as soon as possible for advice and for the defense of battery. Call Carl Barkemeyer at 225-964-6720 for help.