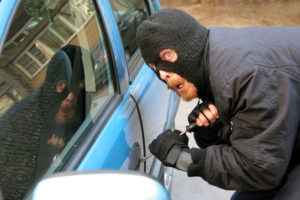 Movies have always painted a picture of burglary in the mind of its audience as a balaclava donning “cat burglar” scaling a wall or sneaking into a bedroom window or even lockpicking the basement door in the dead of night. Sometimes it would even look like an aggressive black-garbed gunman kicking the front door. However, the law does not confine simple burglary into what we see on the big screen.

In order to be convicted of the crime of simple burglary, two elements must concur and must be proven beyond a reasonable doubt by the prosecution, to wit: 1) that the defendant actually entered a building and 2) that such ingress is attended by the intent to commit a felony or theft therein. Absence of one of the elements warrants either the acquittal of the defendant or conviction for some other crime other than burglary.

Explaining further, the first element of the crime may be accomplished in two ways. The first one is by forcible entry or unlawfully entering or breaking into a property without prior consent from its owners. This first way denotes that the entry of the defendant is illegal from the beginning, which means that he has absolutely no permission to enter in the first place. The second way of committing the crime is by unlawful detention of a property or by remaining or failing to vacate a property upon expiration or termination of the period in which the defendant is allowed to stay. Contrary to the first one, in the latter, the entry of the defendant is lawful in the beginning but became illegal after the lapse of a certain period.

On the other hand, the second element of the crime refers to the defendant’s mental state and intention at the time the crime was committed. To be guilty of simple burglary, the defendant’s purpose of illegally entering or remaining in a building must be to commit a felony or theft.

Simple Burglary of a Pharmacy

There is simple burglary of a pharmacy when a person enters any building or other structure which is used in whole or in part for selling, storing, and/or dispensing controlled dangerous substance, without authorization and for the purpose of committing the theft of the latter such as amphetamines, narcotics, and other opiates among others, other than distilled spirits or tobacco.

Simple Burglary of an Inhabited Dwelling

This refers to the illegal entry of a person to any inhabited building or structure which is used by another, in whole or in part, as a place of abode with the purpose of committing a felony. In other words, the crime is accomplished when both the element of entry and intent are present – there must be illegal ingress of a house used by some person as a home with the intent to carry out an unlawful act.

Simple Burglary of a Vehicle

Simple burglary of a vehicle in Louisiana occurs when the defendant is charged with entering a vehicle without the consent of the owner, with the intent to commit a theft or felony therein. Therefore, the common scenario of breaking into a car to get a the stereo or purse out of the car is a felony simple burglary that can land the defendant up to 12 years in prison.

Simple Burglary of a Religious Building

When a person comes into a building which is primarily used as a place of worship such as a church, synagogue, or mosque, not having been allowed to do so and with the same intent as that of the two preceding paragraphs, such act constitute the crime of Simple Burglary of a Religious Building.

The different classification of simple burglary is meted with distinctive penalties as well. For simple burglary of pharmacy, any person found guilty thereof shall be penalized with imprisonment at hard labor for a period of one to ten years. For the first year of its imposition, the offender shall not be eligible to parole, probation, or suspension of sentence.

However, if the offender is convicted for the second time or more often, the same penalty of imprisonment at hard labor shall be imposed upon him but must be for a period of two to twelve years and instead of one year in which he cannot avail of parole probation, or suspension of sentence, the unavailability of the same shall be during the first two years of his sentence.

For a conviction for a simple burglary of an inhabited dwelling on the other hand, the offender must serve one to twelve years in jail at hard labor and he cannot avail of the benefit of parole, probation, and suspension of sentence. While for those found guilty of simple burglary of a religious building, shall pay the fine in an amount not exceeding $2000 and serve jail time for a period of two to twelve years. Although probation is available for the offender, he cannot avail of the same until after serving at least two years of his sentence.

In the crime of simple burglary, misidentification more often than not happens. Thus, it may be a defense in order to avoid conviction. It is important to note that, in order to be guilty of the said crime, the concurrence of entry and intent must be present since there are several other statutes which govern the unauthorized entry and these statutes do not provide that the intent to commit a theft or felony be present at the time of the commission of the offense. If any of the two elements provided above is lacking, the accused may either be acquitted or convicted for some other crime.

No Intent to Steal

We have been successful asserting the defense to simple burglary that the defendant had no intent to commit a theft or felony, although unauthorized entry did occur. This situation can happen when the defendant is so drunk or under the influence that he enters a house different than his because he is confused. Here, there is no intent to steal anything or do anything illegal in the house.

For more information on hiring a simple burglary lawyer, call Carl Barkemeyer at 225-964-6720.