What is the Penalty for Hit and Run?

Hit and Run Penalties in Louisiana

If there is no death or serious bodily injury the court shall fine the defendant not more than $500, sentence him to jail for not more than six months, or both.

If there is no death or serious bodily injury, the judge shall fine the defendant not more than $500, sentence him to jail time for not less than 10 days nor more than 6 months, or both when it can be proved that the driver consumed alcohol or drugs which contributed to the accident and the driver failed to stop knowing that his actions could affect his prosecution.

Felony hit-and-run driving occurs when death or serious bodily injury is a direct result of the accident and when the driver knew or should have known that death or serious bodily injury has occurred. The judge shall be fine the defendant not more than $5000, sentence him to imprisonment with or without hard labor for not more than 10 years, or both.

The most serious felony hit-and-run driving charge occurs where all of the conditions below are met.  In that case, the judge shall order imprisonment, with or without hard labor, for not less than 5 years nor more than 20 years:

(a)  Death or serious bodily injury is a direct result of the accident.

(b)  The driver knew or must have known that the vehicle he was operating was involved in an accident or that his operation of the vehicle was the direct cause of an accident. 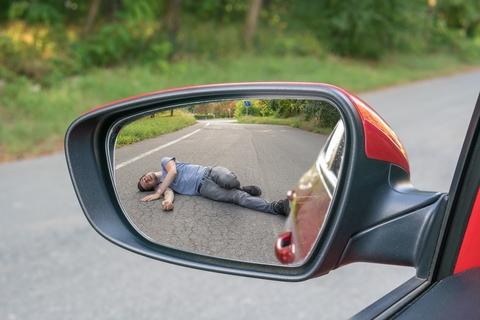 Hit-and-run accident in Louisiana is the intentional failure of the driver of a vehicle involved in or causing any accident, to stop such vehicle at the scene of the accident, to give his identity, and to render reasonable aid. "To give his identity", means that the driver of any vehicle involved in any accident shall give his name, address, and the license number of his vehicle, or shall report the accident to the police.  The vehicle could be a boat as well as a car. In Louisiana, hit and runs occur on the waterways. "Accident" means an incident or event resulting in damage to property or injury to person. This is always a possible defense. If there was no damage, then the accident should not be sufficient to support a hit and run if the defendant flees the scene.

What will happen if you do a hit and run?

If the person that suffered property damage or personal injury, you can bet they will call the police and make a report. The police department has a special Hit and Run unit with investigators that specialize in finding drivers charged with hit and run and then arresting them. The investigators will uncover surveillance video or search databases for any identifying information regarding the fleeing driver, such as vehicle license registrations. Usually, the other driver gets the defendant’s license plate number. Sometimes, the defendant will even stop first and give his identity, then leave the scene of the accident.

How serious is a hit and run?

Hit and run in Louisiana can be very serious, depending on the alleged facts. Most hit and run charges are misdemeanors. However, the amount of damage and whether or not the fleeing driver had insurance determine how serious the hit and run can be. For example, if the damage to the victim vehicle is severe and the fleeing driver doesn’t have insurance and the victim doesn’t have uninsured motorist coverage, there could be a potential restitution issue of tens of thousands of dollars.  The judge could just stick the defendant in jail for 6 months for that.

What is the difference between hit and run and leaving the scene of an accident?

Can you prove a hit and run?

It is up to the prosecutor to prove the criminal charge of hit and run in court. Before it gets to that point, the police officer has already conducted the investigation based on the statements of witnesses at the scene of the accident, surveillance video, photos, cell phone videos, damage to the vehicles, and any statements from the defendant. Many times, after an accident, the victim driver will whip out her cell phone and start recording video of the defendant driver fleeing the scene. The video might pick up the license plate number which will be turned over to the police.

Do most hit and runs get caught?

I bet most hit and runs do not get caught. At least, it used to be that way. Now that everyone has cell phones with cameras and video, the victim driver’s usually get video of the defendant leaving the scene. Therefore, more people get caught for hit and run than they used to. After the victim calls the police, the police will discover the address of the defendant-driver from the DMV records and then go to his house and make the arrest.

Is it hit and run if you come back?

Yes, it is still a hit and run if you come back. The law requires that the driver immediately stop the vehicle and give his identity. Coming back hours later after sobering up isn’t going to prevent a charge.

Yes, full coverage insurance, including collision coverage, will coverage damage to your vehicle if you’ve been hit by another vehicle that flees the scene. The insurance company could later try to subrogate its claim against the defendant. Many times, the prosecutor in a hit and run case may try to recover the deductible paid by the victim from the defendant in court, therefore, making the victim whole again.

Is hit and run worse than DUI?

In Louisiana, hit and run and DUI first offense both carry up to six months in jail. However, the judge could give the defendant a minimum of 10 days in jail if the prosecutor can prove the defendant did all of the following:

If you crash while drunk, you could be looking at a DUI. If you flee the scene, you could be looking at hit and run misdemeanor with the sentencing range of 10 days in jail up to six months only if it can be proven you were drunk at the time. So, if the police come to your house soon after you bailed from the scene and you’re drunk, they may try to claim you were drunk at the time of the accident. Other evidence could be the observations from other people at the scene of the accident. If they say you seemed intoxicated, that could be evidence against you if they testify at trial.

What should I do if I hit a sign?

Contact Louisiana Hit and Run defense attorney, Carl Barkemeyer, at 225-964-6720 if you were arrested for fleeing the scene.