Possession of Firearm with CDS in Louisiana

Illegal Carrying of a Weapon with CDS Lawyer in Baton Rouge

Possession of a firearm while in possession of CDS (controlled dangerous substance), aka drugs, is a serious felony offense in Louisiana. It is usually a charge that is added on when the officer discovers a weapon is present after he conducts a drug arrest.  The charge is often referred to as the “trigger-lock” charge because the gun locks in the conviction.  The reason is that a charge for illegal carrying of weapons with CDS in Louisiana carries a sentencing range of 5-10 years in prison without benefit of probation, parole, or suspension of sentence.  This is a rough sentence.  Prosecutors take this gun charge seriously because drugs are involved. Contact us at 225-964-6720 if you need an attorney in Baton Rouge or anywhere in Louisiana for a possession of drugs and gun charge.

What is Possession of Firearm with CDS in Louisiana? 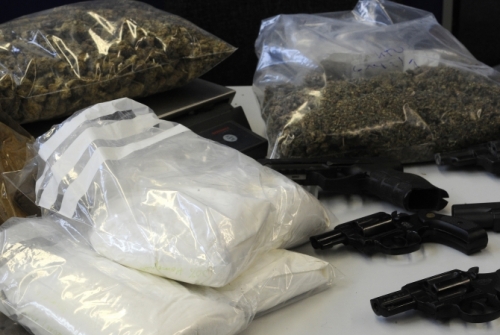 The charge is statute La RS 14:95 E.  It states that it is illegal to use, possess, or have under his immediate control any firearm, or other instrumentality customarily used or intended for probable use as a dangerous weapon,

Illegal Carrying of a Weapon with CDS Sentence

The offender shall be fined not more than ten thousand dollars and imprisoned at hard labor for not less than five (5) nor more than ten (10) years without the benefit of probation, parole, or suspension of sentence.

Upon a second or subsequent conviction.  The offender shall be imprisoned at hard labor for not less than twenty years nor more than thirty years without the benefit of probation, parole, or suspension of sentence.

Defenses to Possession of Firearm with CDS

Defense Lawyer for Possession of Firearm with CDS

Carl Barkemeyer is a possession of firearm with CDS lawyer in Baton Rouge. He has successfully defended clients with these charges in Louisiana for many years. See some of his informative videos to learn more on the strategies and tactics he uses to defend his clients.  Contact us at 225-964-6720 if you or someone you know has been charged with illegal carrying of a weapon with CDS in Baton Rouge, Livingston, Port Allen, or anywhere else in Louisiana.

How to Handle a Possession of CDS Charge

CDS simply means Controlled Dangerous Substance. The federal law prohibits the possession of CDS as they are substances found to dangerous and damaging based on their potential for abuse. Controlled Dangerous Substances are drugs regulated by federal laws. Possession of these drugs without a valid prescription is a serious offense under the law. The result of the possession of a CDS charge is often disastrous if the offender does not know the right way to go about managing the case.

It is illegal in Louisiana to have CDS. These drugs have been put into 5 schedules based on the potential of abuse and dependency. Those that have medical uses require a valid prescription for possession.

Louisiana classifies CDS into 5 schedules, with the schedule I being the class of the most dangerous drugs. The drugs in schedule I have the highest probability or potential of abuse and addiction, and usually with no recognizable medical use. The classification of drugs into CDS is used to determine the penalties for possession of specific CDS.

This schedule consists of narcotic drugs or any material, substance, preparation, mixture or compound containing narcotic drugs or their salt. Not more than 1 mg of difenoxin, not less than 25 micrograms of morphine sulfate per dose, and Dextropropoxyphene.

Schedule III contains Fenfluramine. Any material, substance, preparation, mixture or compound containing any quantity of Fenfluramine, including its isomers, salts, and salts, of isomers.

This schedule contains other substances. Any material, substance, preparation, mixture or compound containing any quantity, including the salts, isomers, or salts of the isomer of Pentazocine and Butorphanol.

Penalties of Possession of CDS

Due to the significant consequences and penalties associated with possession of CDS crime, you need to get a drug defense lawyer to defend your case. Upon an arrest, you should contact your lawyer as soon as possible. A defense attorney can make a difference between you getting a conviction or getting your case dismissed.

We represent clients charged with Possession of Firearm with CDS throughout Louisiana. If you need a lawyer for Illegal Carrying of a Weapon with CDS anywhere in Louisiana, contact us at 225-964-6720. Some of the areas may include: